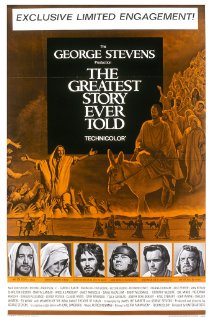 This Bible inspired movie takes a lot of liberties with the original “script”. A lot of the facts are “tweeked” to make better movie viewing. One of the most obvious is that, in the film, Judas Iscariot kills himself by jumping into a fire, but the Gospel accounts of this story say he hung himself.

At Jesus of Nazareth  final moments, this film looks back in triumphant retrospect,  where the eternal questions of faith and doubt become resolved.

There is no nudity in this film and the sex is implied but not shown.

Trivia: Telly Savalas shaved his head bald for his role as Pontius Pilate. He kept his head shaved for the rest of his life.

One story that has been attributed to this film is about the legend John Wayne (the Duke) who only had one line: