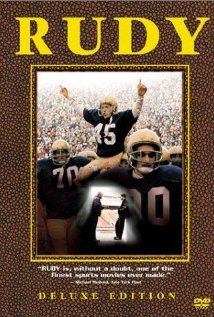 Sean Astin does a fantastic job in the portrayal of Rudy, a true story of Daniel “Rudy” Ruettiger, who comes from a working-class Catholic family whose passion is Notre Dame football. Rudy has always planned on attending Notre Dame, and playing on the football team even though his grades and physical size were not up to their standards. After graduating from high school, he went to work in the steel mill, like most of the other young men did. When his best friend died in a tragic accident, Rudy decided that he could not put his dreams on hold any longer. He was able to get into Holy Cross Junior College and went to work to transfer to Notre Dame. Along his journey, he befriends Father Cavanaugh (Robert Prosky), who gives Rudy some much needed advice and encouragement. His hard work finally pays off when he gets his acceptance letter from Notre Dame, but his battle is far from over. He still wants to play for the “Fighting Irish”. His story of determination, perseverance and sheer will should be a lesson for all to see.

Because of language, football type violence and the fiery explosion that takes the life of Rudy’s best friend Pete (Christopher Reed), this movie is not recommended for young children.  But if you have the chance to see the television version, most of these things have been edited for general viewing.

One of the best quotes of the movie is by Father Cavanaugh: “Son, in 35 years of religious study, I have only come up with two hard incontrovertible facts: there is a God, and I’m not Him.”

This Film is great for a Theater Type Setting and is DIGITAL, BLU-RAY and DVD Collection Worthy.