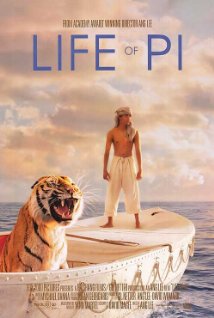 In the Epic film The Life of Pi (2012), a Canadian writer visits an Indian storyteller Pi Patel and asks him to tell his life story. Pi tells the story of his childhood in Pondicherry, India and the origin of his nickname “Pi”. Since his name was Piscine Patel (Ayush Tandon) who was a young Indian boy curious about God in all of his many forms. Piscine sounded embarrassing to him, so to get everyone to start calling him Pi, at the start of the school year, he began every class reciting or writing the digits of the formula for Pi: the ratio of the circumference of a circle to its diameter (this number could go on forever). Pi’s father was a zoo owner and explained that the municipality was no longer supporting the zoo and he had hence decided to move to Canada, where the animals the family owns would also be sold. They board on a Japanese cargo ship with the animals, which encounters a massive storm causing the sinking of the vessel. The only survivors were on the lifeboat with Pi and they are : a zebra, an orangutan, a hyena and a male Bengal tiger nicknamed Richard Parker. This is when the real tale begins for Pi.

I was hesitant about this film thinking it would be lacking and I was happily proven wrong. This is a wonderful motion picture, the language is clean and the sexual content is virtually zero. There are the perils of life, animals being carnivores, while the actual gore is kept to a minimal. These things will need to be explained to the younger viewers, but are the things of our natural world. The visual effects are spectacular and the score was wonderful. It is a fine film and I recommend it highly.

This Film is great for a Theater Type Setting and is DIGITAL, BLU-RAY and DVD Collection Worthy.